I’ve been called many things in my life …

Eric James Miller got the nickname Venice Dude while living in Venice Beach, California. His record for not going east of Lincoln Blvd. (California Route 1) was twelve weeks. His record for keeping the top down on his 5-speed Toyota Celica was nine months.

Though he remains inspired and hopelessly in love with the many different moods of Abbot Kinney’s famous city by the sea, a conflux of eolian circumstances moved him away from Venice in 2004. Forever a “VeniceDude” at heart, he now makes his happy home outside of Las Vegas with his beautiful wife Laura and their golden retriever (who some believe is the reincarnation of Ava Gabor). 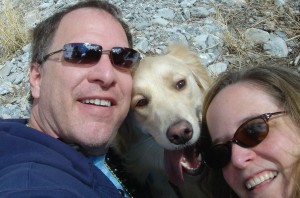 Since making the big move away from the over-crowded City of Lost Angels, Mr. Miller has built a small reputation as a freelance journalist in the neon desert and is putting the final touches on a new novel, an exciting mystery cozy “For Rent: Dangerous Paradise”. Set inside a fictionalized version of his old apartment building in Venice Beach, the story makes living at the beach both a real and a surreal adventure for readers. Picked up by WEE, an Australian ebook publisher in 2012, it is due out in early 2013.

Poke Eric now on Facebook or check out his blog to drop in on his current thoughts and endeavors. Among other things, he’s a novice painter and wine-maker. If you’re nice to him you might get a free painting or a bottle of an award-winning Barbera blend.

For those interested in life in Las Vegas, check-out some of his freelance articles for e-zine Living-Las-Vegas and travel web-site Las Vegas Getaway.