Lost But Looking Up in a WordPress Maze

As the admin of Writers of Southern Nevada’s website I accidentally deleted the blog last night while trying to post a new post about one of our members new book release. Four hours later I couldn’t figure out how to fix what I had done.

So this morning I jumped onto my old site www.venicedude.com since I built it from scratch using WordPress and know the settings a little better (I did not build the WSN site but I have been keeping it updated the last two years since WSN lost awesome web guru Peggy Richardson.)

Dinking around for the last three hours and digging out my old copy of “WordPress for Dummies” has, so far, helped me improve www.venicedude.com and if this post lands where I hope it will how I hope it will, I plan to reattempt to fix my boo-boo on the WSN site.

If something goes wrong, I will probably go for a walk so that I can mumble to myself without disturbing my wife who is working in her office downstairs.

I am by no means a WP expert. Far, far from it. But I’ve learned a little bit about Categories and Templates and Menu Bars in the last twelve hours and now I feel bold enough to attend a WordPress Meetup here in Las Vegas and ask someone for help.

At least I can now describe what I don’t know using some of their own vernacular ….

Unexpected free time to write on a Sunday afternoon!

I took this Star Trek Personality Quiz and it turns out I’m 95% Riker and also 95% Troi (I’m 85% Kirk.) I guess I have to agree with that. I often feel like a Betazoid! Take the test yourself and see who you best represent in the Star Trek universe. 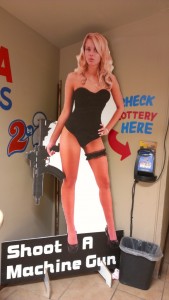 One of the things they don’t tell you when you move to Las Vegas is any mention of the shear joy of driving to Arizona.

For car enthusiasts, or just folks who like to drive, the run through Boulder City, across the new Pat Tillman Bridge in front of Hoover Dam and down the arid, forty-five miles of high speed Mojave landscape of the border between Nevada and Arizona, any excuse to put the pedal to the metal in your favorite car is easily validated.
If you get the chance to win $400 million for making the journey, it’s only gravy :- )

I’ve got a zippy late model car that not only still plays CD’s, it plays cassette tapes. Yeah, that’s right, cassette tapes. As someone who grew up listening to albums and getting burned (but did I?) on portable 8-track players, the chance to dive into my old music collection is an increasingly rare, joyous private moment.

I don’t even want to mention the wonder of Willow Beach, or the vistas of Temple Bar. Even shooting a clip out of a .50 caliber machine gun or being asked if a 2012 Jeep takes diesel by Swedish tourists pales in comparison to the journey. 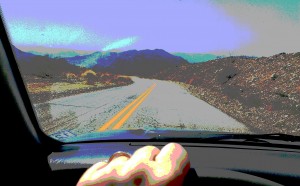 I’m going kayaking and you can come with me if you want to.

I discovered, through practiced Arnold Schwarzenegger impersonations, that doppelgangers are alien scientists here to observe us. I discovered that Mark Knopfler and the rest of the Dire Straits band, must have at one time, been stranded in some part of the great American southwest desert, because they spook so eloquently about it.

I discovered, again, that it’s not about the destination it’s about the journey. 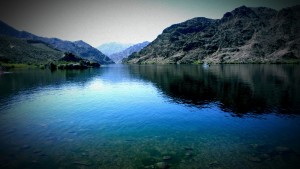 The Desert Is Pretty

It gladdens my heart and I appreciate the fact the joy of driving to Arizona wasn’t in any of the Vegas tourism or newbie arrival documentation. Living in a desert isn’t for everyone. But the skies are so often so incredibly blue and the little details, the in-between nowhere exits that lead to watery oasis, make everyday life so unpredictable, so unexpectedly profound, that even road trips on Wednesdays make sense.

When the cobwebs of life start becoming sticky, you can either alert the spider by struggling against them, or you can take the spider into the desert, set it free, then return home with peace of mind.

I like returning home with peace of mind. I hope your travels take you where you need to be today too. 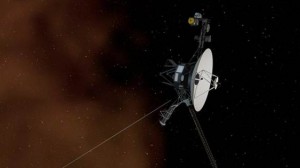 NASA announced this week that intrepid little Voyager 1 has now passed beyond our solar system into interstellar space. We even know what it sounds like out there!

But what happened to that battery technology that we launched into space 35 years ago? How is Voyager still sending signals back to Earth every 17 hours from billions of miles away and yet I have to charge my “smart” phone every night or I’m cut off from the rest of the world tomorrow?

September 1977 was a long time ago. Farah Fawcett, Starsky & Hutch and El Caminos were the height of cool. Well, along with Bowie of course. NASA was even cool and not considered a waste of money. Little did we know just how much advanced technology we launched into space though. Unfortunately, some of it, like those battery packs, still hasn’t become part of our everyday norm back here at home on our little blue marble.

But, wow, interstellar space. It must be beautiful out there. Talk about limitless horizons!

But, it’s certainly dangerous too. It’s a tad chilly and, what if our little emissary blips on the radar screen of some scout ship for a militaristic, metalized, giant amoeba-species?

It’s a dangerous paradise, indeed. It’s fun to think about, but for the time being, I think I’ll take Venice Beach instead. ;- )

This weekend Paracon 2013 is coming to Vegas! This year it will be held at Binion’s in sparkly shiny, newly revitalized downtown Vegas from August 23-25. Lots of Syfy Channel show stars will be speaking and vendors of cool ghost hunting gear will be on the convention floor.

When Serena Andrews and her teenage son suddenly disappear from their Venice Beach apartment, the resulting vacancy in the building jeopardizes the secrets and lies of all the other residents. Moving from unit to unit chapter by chapter, each resident’s unique point-of-view reveals a spider web of dangerously intertwined lives. This intriguing modern day murder mystery and ghost story will appeal to anyone who has ever had suspicions about their neighbors, or wondered about past residents.

Who killed Serena Andrews and where is her missing son? Step inside 399 Broadway to find out….

Thank you for using our shopping system!

Having my novel “For Rent: Dangerous Paradise” accepted last year by e-publisher, Writers Exchange, has led to the past week of release anticipation. Ironically, the electronic versions (Kindle, Nook, iPad, HTML) are still on their way into cyberspace but early print editions of the book are available here!

Print versions will be available on Amazon by early next week and they should be available for order through Barnes & Noble and other bookstores towards the end of September.
END_OF_DOCUMENT_TOKEN_TO_BE_REPLACED

Guess who is banned for life from the Venice Drum Circle?

Forget the arraignment. Save the poor beleaguered California tax payers some money and just send Nate back to Italy with the parents of the beautiful newlywed he ran over.

“Vinnie, Marco, this is Nathan Campbell. He’s feeling a little depressed and disgruntled. So why don’t you take him out back and dump him in a that old well with the lousy acoustics and fa’get about ‘em?” 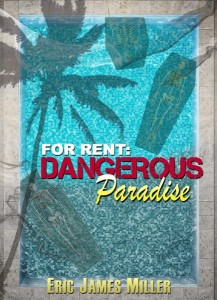 I just sent the final revision of “For Rent: Dangerous Paradise” back to the publisher a few minutes ago. Now things are really going to start to get interesting! The brave new world of e-publishing is about to have another newbie in its ranks.

I feel like I’ve still been living in Venice Beach for the past six years. My little apartment at the top of the stairs and the courtyard I walked through thousands of times seem in many ways more real to me than the street in Las Vegas where I live now.

I’ve been living so closely with the reflections and shadows of my not entirely make-believe world in Venice that it feels a little strange to have finally hit SEND and released them into the broader world. It’s like the moving van finally arrived, packed me up and carried me (kicking and screaming?) out of there.

Well, time to open a nice bottle of red to celebrate. This 2007 Chumeia Cabernet is from a very special, small family owned winery in Paso Robles.

Here’s the list of characters in “For Rent: Dangerous Paradise”. More to come about each of them soon!

The Modern Day Residents
of 399 Broadway

(*) in 1968 the two self-standing center courtyard units, Unit 7 and Unit 8, were demolished to make room for a small swimming pool.