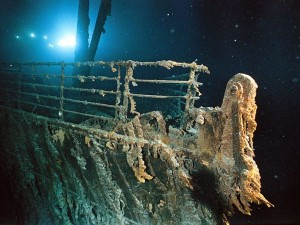 Today is the 100th anniversary of Day Three of Titanic’s fateful voyage from Southhampton, England in 1911. They were on their way to New York, New York USA – a coincidence not lost on a writer trying to get to the same destination via Las Vegas, Nevada in 2011.

Aside from that haunting similarity, this remains a brief, very special and very momentary period in time to celebrate the joy those adventurers felt in-between departure and disaster.

On April 10, 1911 the Titanic set sail fully loaded and fully provisioned from Southhampton, England. At the time it was the largest, most extravagant and engineered boat ever built by Man. Bound for New York City (1911 New York City!) imagine the enthusiasm of all those looking over the rails as they plied the across the Atlantic Ocean!

So often we hear of the dying hours of the Titanic, but this 100 year anniversary of the five glorious days between departure and demise are rarely told, and too often NOT celebrated.

Those 2,228 very special people embarked on the most lavish luxury liner ever built by man on April 10, 1911. Okay, we all know what ultimately happened. But imagine Day Three at sea aboard that vessel, clear skies; the pestilence of Belfast and England behind you; the promise of the New America in front of you.

I mean, some of these people became Frank Sinatra’s parents’ and Bruce Springsteen’s grandparents’ neighbors! How cool is that?!

So, it is the anniversary of a magical time of dreams and aspirations, not just for the 710 survivors, but for each and every one of the 2,228 epitomes of the human condition that stepped aboard that “too big to fail” boat back in 1911. They are our distant cousins, neighbors and co-workers parents and grandparents cousins and friends; they are also, possibly, time gone by representations of you and me. Today, exactly one hundred years later, I feel a special kinship to their scared exuberance about the future!

True. Unfortunately, they were destined for a special, tragic place in history books. But today it was Day Three on a voyage of hope, wonderment and lavish engineering and I think that’s important to remember. Titanic was not a tragic voyage, it was a voyage that ended tragically.

Graciously please steer us away from our own icebergs of equally arrogant stupidity!

This entry was posted in News and tagged bright side of Titanic disaster, honoring the honorable dead, James Cameroon call me, people of Titanic, the untold side of tragedies, Titanic anniversary. Bookmark the permalink.