This weekend Paracon 2013 is coming to Vegas! This year it will be held at Binion’s in sparkly shiny, newly revitalized downtown Vegas from August 23-25. Lots of Syfy Channel show stars will be speaking and vendors of cool ghost hunting gear will be on the convention floor.

This is the second year for Paracon. Last year it was held out the spooky cool, Old West museum town of Bonnie Springs, which is about 15 miles northwest of Vegas near Blue Diamond. 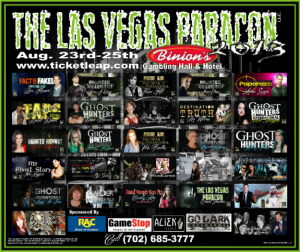 This year’s attendance is expected to double in size to around 400 participants. Tickets are pretty affordable too. VIP passes for the 3-day event are only $150. Single day passes are only $50. The Friday night and Saturday night equipment tech investigations are a bit pricier at $125, but still a good value. Visit TicketLeap for more info.

Friday night is going to start out with an Abduction Party around the pool deck located on the roof of Binion’s Gambling Hall & Hotel. Binion’s is a classic old Vegas destination with lots of stories hiding just underneath its layers and layers of smoke-filled gilded paint. Obviously attendees staying at the hotel are going to have first dibs on this super-charged fun event. The Syfy Channel will even have a camera crew there to film the action for one of its upcoming shows.

Saturday and Sunday are going to be the main days of the conference. Featuring investigation workshops, psychic skills workshops, equipment reviews, and over a dozen celebrity guests including Brian Harnois of “Ghost Hunters”, Travis Hill of A&E’s “Psychic Kids”, Dana Workman of “Haunted Highway”, Jason Gates of “Haunted Collector”, as well as mediums Cassidy Rae, Vicki Franklin, and Edward Shanahan.

Sponsored by the Elite Vegas Paranormal Society (EVPS), Paracon 2013 is billed as the largest paranormal convention in the southwest and promises to be a can’t miss event for anyone interested in the science, or celebrity, of ghost hunting.

Like many of the more credible organizations popping up around the paranormal fringe, EVPS takes a skeptical approach towards ghost hunting. The founders, Brian, Linda and David Purdy come from a medical science background and their slogan, “We don’t offer proof of an Afterlife … just the possibility of one” really makes me want to get to know them.

Despite my own vivid, multiple encounters with spirit energy and personal explorations with mediumship and the Tarot, I remain skeptical of most so-called ghost hunters and mediums. I feel too many people are too eager to believe in the paranormal, which is one reason why I’m having so much fun writing a protagonist who is resisting her clairvoyant gifts. (The scene where Dana describes setting up a palm reading table out on the Venice Strand and giving her customers more hand massages than advice “because people pay way more for palm reading than they do for hand massages” is one of my favorite scenes in FRDP ;- )

Because of the nice balance between science and ghost hunting, I look forward to checking out this year’s Paracon and plan on using next year’s event as motivation to finish the sequel to “For Rent: Dangerous Paradise”. It’s going to be set in Vegas and I consider myself a budding expert on haunted, and possibly haunted, places out here in the Mojave.

Maybe next year I’ll even be able to be a guest speaker at Paracon 2014!

I’ve been to several of the places already investigated by EVPS and hope to tag along with them on one of their upcoming investigations. Beyond the hype and false drama sometimes created by the recent wave of ghost hunting shows on television, I can attest that there are many haunted places in and around our little neon capitol of the world. I look forward to doing more research in the next few months and sprinkling some real Vegas history still hiding in the shadows, just like I did in FRDP with Venice Beach.

Black is probably going to be the dominant in vogue fashion choice at Paracon. Fortunately it’s been pretty warm in Vegas of late and most of my black clothes are fresh and clean. :- )