A designer I hired on spec to do the cover art of “For Rent: Dangerous Paradise” just sent me a .jpg of his design. 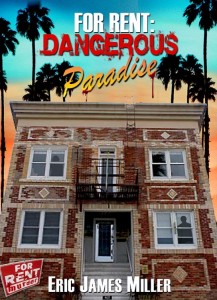 But don’t totally love it.

What do you think? I welcome any comments or suggestions, either publicly below, or privately to my e-mail address eric at venicedude dot com.

The main thing that I think is missing in his design is any hint at the ghost story subplots in “For Rent: Dangerous Paradise”. The story is not just about the modern day mystery surrounding the disappearance of a single mother and her son. It’s also the tale of several former residents still lingering and searching for peace in the shadows of the apartment building.

Designing a book cover is complicated. It has to be an aesthetically pleasing sales pitch without seeming so. For print editions and e-publishing, an enticing and graphically appealing cover is very, very important. Just ask my friend Deb Coonts about the difference cover design art made in sales of the first book in her Lucky O’Toole series, “Wanna Get Lucky?”.  Why was the sequel selling better than the first one? Cover art.

Many consumer studies have shown that a good cover is often what compels a potential reader/buyer to pick a book off a shelf, or click it on an electronic list. Especially when they aren’t already familiar with the author. 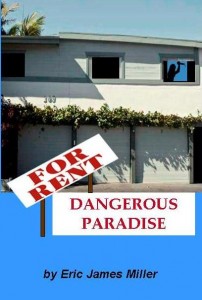 The author’s attempt at cover art for “For Rent: Dangerous Paradise”

Ironically, getting readers to turn a book over to see what it’s about more often than not depends on the cover art.

A picture is indeed worth a thousand words. Especially when it comes to book sales.

My publisher’s cover art designer is apparently overloaded with work, which I’m told has impacted the release of my novel. I took a shot at designing a cover myself, but she wanted to give her in-house artist “a shot.” That was two months ago. So I took matters into my own hands and hired an outside cover artist. Like I said, I like what he came up with, but I think I’m going to ask him for one or two more designs just so that I can present the publisher a few different options. 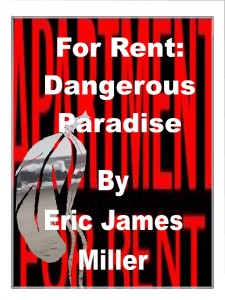 I think it’s important for me to distinguish my novel a bit within the murder mystery genre. To that end I would like to see a cover design that hints at the building being haunted. I think this design that my wife did in PowerPoint begins to accomplish that, but unfortunately my publisher has already rejected it even as an inspirational jumping off point.

So I need to decide whether to present idrewdesign’s idea to my publisher next week, or find/commission a different design from either him or someone else that evokes more of the spooky undertones of my marketing mission.

With that in mind, again, I welcome any thoughts, comments or suggestions, either publicly below, or privately to my e-mail address eric at venicedude dot com.

Decisions, decisions. What pretty picture will ultimately tell the tale of “For Rent Dangerous Paradise”?

Who knew being an author means wearing a lot more hats than just a writer?