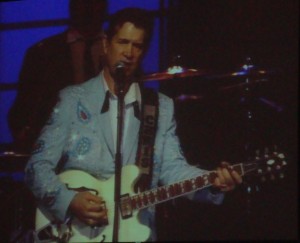 Last night Laura and I went to see Chris Isaak at Green Valley Ranch. Before anyone asks ‘why-in-the-world-would-you-do-that?’ the tickets were free, sent to us by the casino probably because we don’t go there much anymore. Too bad their “generosity” didn’t amount to much.

I remember when Chris Isaak had his fifteen minutes of fame in Hollywood in the early ’90′s. Execs at Miramax and other studios salivated and threw project after project at him hoping they had discovered the “New Elvis”.

Well, as we all know, they didn’t because he wasn’t and Isaak’s fame quickly vanished from the airwaves.

After last night’s performance, I can see why.

Although the venue at GVR was just a glorified conference room with a stage, the main reason the show really sucked was because Isaak’s band is so, so very lame.

Exploring the edges of tepid to lukewarm, it’s hard to believe these guys have been playing together for 27 years (a bewildering little factoid shared by Isaak at one point between songs). It’s equally hard to believe any of them have ever been anywhere near their self-proclaimed roots of rock ‘n roll in Memphis. Except for Isaak, his band either doesn’t enjoy the music they are playing or they simply just don’t feel it.

The lead guitarist is some yamaka wearing joke named Hershel who missed dozens of bridge notes on their own songs and also on the well-known Johnny Cash, Roy Orbison and Jerry Lee Lewis songs they covered! Even Isaak called him out and tried to get him to “let loose” but the talent just wasn’t there.

The bass player came to life a little when he traded in his bass guitar for a stand-up bass, but he never once laid down a solid, down home rockabilly or bluesy beat to intro a song or segueway between well-know refrains of popular songs. The piano/keyboard player may once had some fire in his gut, long, long ago, but I suspect arthritis got him replaced on a church organ last month and he called in an old favor to rejoin the band.

I should probably have it in my heart to completely skip saying anything about the drummer. But I don’t. I’m pretty sure he was either one of Dick Cheney’s worn-out, organ donor clones, or a mummy from one of those Brendan Fraser movies. Either way it was painfully obvious that he has a very important side job that keeps him away from all band practice and any tutorials on drumsticks or rhythm.

Now I know that Chris Isaak is the star of the band and that the band is there to make him look good. Some fans may argue the band holds back because they don’t want to/aren’t allowed to upstage him. But Isaak wears his guitar better than he plays it and I bet he’d be the first to admit it. Hell, he even joked he combed his hair and wore a suit (baby blue BTW) with the most sequins on it so everybody would know he was the star of the show.

Make no mistake about it though, Chris Isask is a very talented, charismatic front man whose gift to the world is his voice, just like it was with Elvis. Unfortunately he is surrounded by a boat anchor he calls his band.

I love rockabilly, the Blues and good old fashion rock ‘n roll and it’s clear Chris Isaak does too. He’s still got a great vocal range and he entertains the audience between songs with boozy witticisms and down-home humor. Plus, he gets more excited about playing other people’s music than his own, which extends his audience far beyond the love sick, forlorn material he is known for.

If Chris Isaak wants to stop playing convention halls with low ceilings and bad acoustics (this is the second time he’s been here in two or three years), or get booked as a permanent act on the Strip, he’s got to dump his entire joke of a band and get some decent musicians who love rock ‘n roll as much as he does.

Otherwise, take this as a warning if the Chris Isaak tour comes to your town. Even if the tickets are free, don’t expect to get your money’s worth.

2 Responses to The Tepid Edge of Rock ‘n Roll